Our Top 5 typical animals of Aruba

Aruba is known for its rich underwater world with many beautiful fish, but also on land there are several animals that are certainly worth writing about. Prikichi, Kododo Blauw and Blenchi are probably names you have never heard before but they all live in Aruba. Some of them can even be spotted in the gardens of Aruba Sunset Beach Studios. We choose our top 5 of typical animals in this blog.

1. Shoco
Many countries have an animal as one of the national symbols. New Zealand has its funny kiwi - a bird with a strange beak, Canada has its robust beaver and the United States has its superior Eagle. In 2012 Aruba also promoted an animal to a national symbol: the Aruban burrowing owl - locally known as Shoco. This owl is a sub-species of the burrowing owl that lives only in Aruba. It's name is derived from its unusual habit of nesting underground. The Shoco is barely 20 centimeters in size, with prominent long legs and large yellow eyes. Where most owls only hunt at night, the Aruban burrowing owls go on a predatory mission both at night and during the day, with insects, small rodents, lizards and small birds being the victim. The Shoco population has greatly reduced in the last few decades and is now endangered, with estimates of less than 200 pairs remaining. Threats include over-development and the invasive boa constrictor. 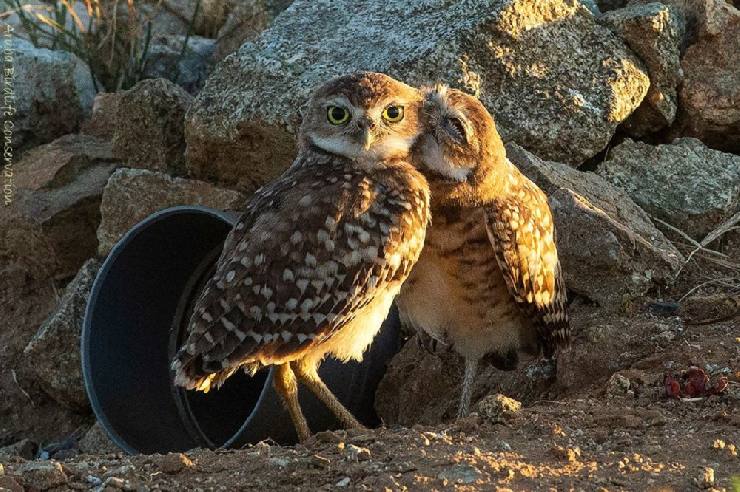 2. Prikichi (Aruban Parakeet)
Of the 249 bird species recorded in Aruba, there are only two endemic sub species; birds which only live in Aruba and nowhere else in the world. Those are the first named Shoco and Prikichi. In 2017 the Prikichi became the National bird of Aruba. It may appear green at first sight, but it has beautiful blue colors in the wings, yellow under the tail and a yellow-orange head. They are very social and live in large groups, called flocks. They can be seen where there is vegetation so you will probably not spot them in the tourist areas. Their diet is based on seeds, fruit, eucalyptus leaves, various types of ferns and insects. Unfortunately, the invasive boa constrictor is yet again an enemy and causes the population of this bird to downsize. 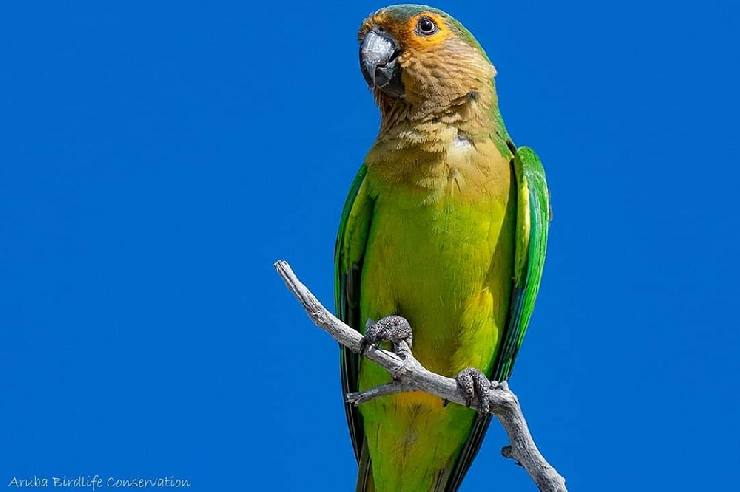 3. Blenchi (Aruban Hummingbird)
The third bird, typical for Aruba, is the Hummingbird or 'Blenchi' in Papiamento. Hummingbirds are the smallest of all the bird species with an average length of 3-5 Inch (7.5-13cm) and they weigh less than a nickel. The name hummingbird is given to them because of the humming noise their wings make as they beat so fast. Hummingbirds have a very high metabolism and must eat all day to survive. They consume about half their body weight, feeding every 10-15 minutes and visiting 1,000-2,000 flowers throughout the day. They drink the nectar of flowers by moving their tongue in and out about 13 times per second. In addition to nectar, these birds eat small insects, like ants and mosquitoes and are therefore great to have in your backyard. Also in the gardens of Aruba Sunset Beach Studios, especially in the neighborhood of the 'tuturutu' flowers, you can spot them. 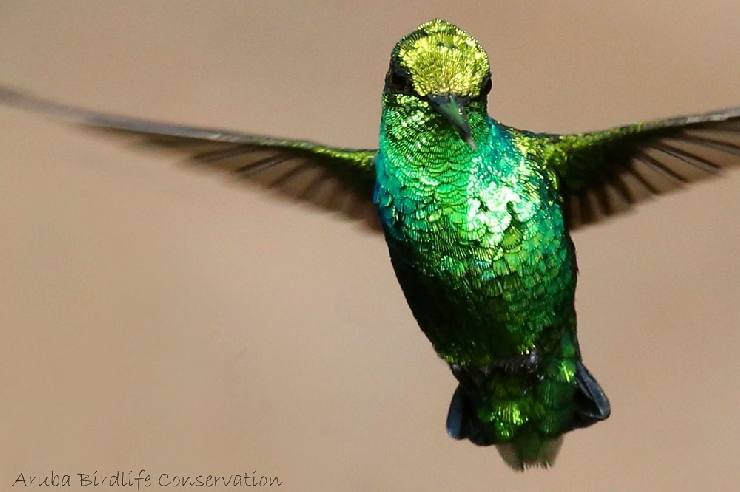 4. Sea turtle
No bird this time, but the sea turtle is another wonderful animal which is typical for Aruba. Out of the seven existing sea turtle species, four can be found nesting in Aruba: the Leatherback, the Loggerhead, the Hawksbill and the Green Sea Turtle. Where the Hawksbill likes to eat algae, sponges, sea cucumbers and crabs, the Green Sea Turtles only eat plants and algae. The Leatherback is the biggest turtle type found in Aruba and can grow over 6 ft long and weigh nearly 2000 pounds. The nesting season runs from March through September and the incubation takes about 60 to 70 days. In that period, nests can be found on the beaches. Mostly on the east side, but also some on Eagle Beach, Palm Beach and Arashi Beach. The nest will be marked with red & with bars and local foundation TurtugAruba will monitore the nests until they hatch. When you see sea turtles nesting or detect tracks that may indicate the nesting just has happened, please contact the hotline: (+297) 592 9393. Other ways to protect them are: no driving or littering on the beaches, no artificial lights at night and never disturb or touch them when seen. 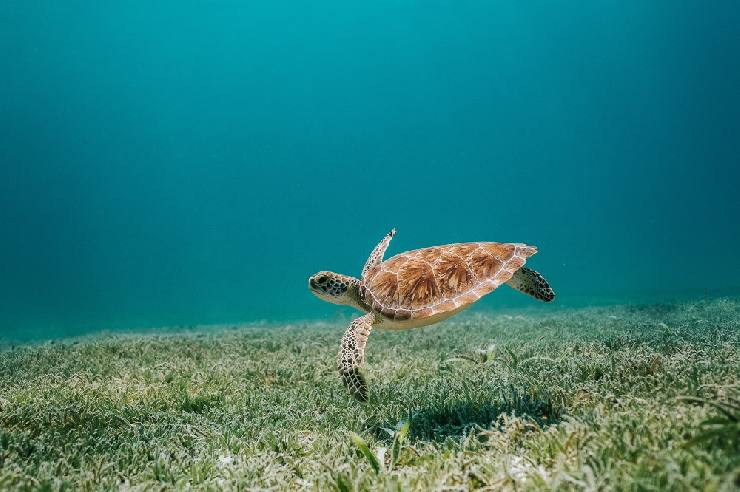 5. Kododo Blauw (Blue Lizard)
The Kododo Blauw finishes our top 5. This is the blue lizard which you probably have seen if you have been to Aruba before! Varying from tiny geckos to large stately green iguanas, Aruba certainly has no shortage of lizards. The lizard family has thirteen different members in Aruba, including two species of whiptail lizards. The Aruban whiptail lizard is a unique species that only occurs here, of which one is the Kododo Blauw. These lizards are also among the fastest lizards in the world. When warmed up by the tropical sun, the speedometer goes up to thirty kilometers per hour! Kododos also play a very important role in the ecosystem of our One Happy Island because they are a spreader of seeds by eating berries. In addition to vegetable fruits, kododos also slobber insects and steal eggs from the nests of birds and other lizards. However, the easiest way for them to get food is begging from people. They are not afraid and like to join people who have a picnic or a barbecue. So, might you be eating outside and seeing one of these blue lizards, they will probably stop by hoping for some leftovers. 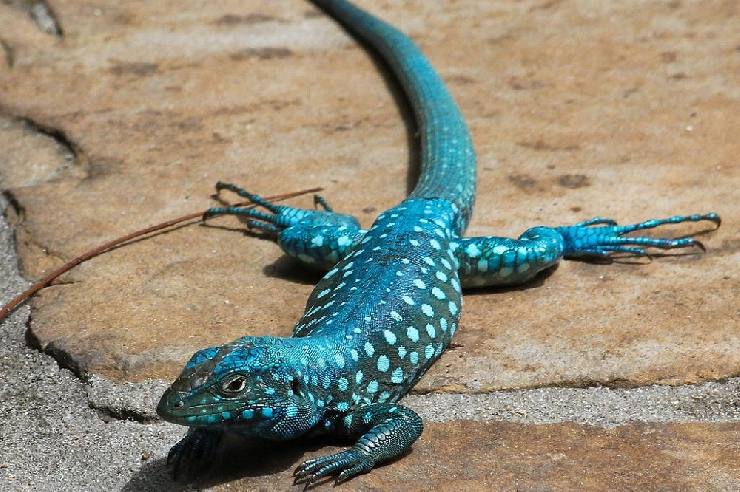 One last tip: The landscape of Aruba is unique and is the natural habitat of many animals. For some animal species, Aruba is even the only place in the world where they occur and live. In addition, the island is blessed with the surrounded Caribbean Sea including the enormous rich collection of coral reefs and therefore, marine animals. Please help us preserve these animals and take care of our island when you visit!